Pete Hamill was top editor at the New York Daily News for, what, eight, nine months? He and I never had a one-one-one conversation that wasn’t small talk.

But, man, was he an inspiration. He set a tone in the newsroom and for news coverage that I’ve never seen matched by any leadership team. He truly wanted to make the Daily News every New Yorker’s newspaper, from Staten Island to Hollis to the South Bronx. 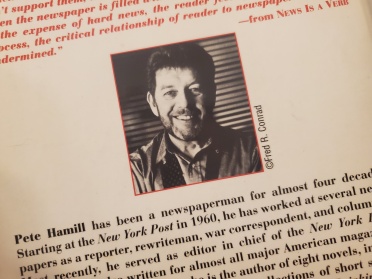 He sought to please janitors and sanitation workers while harboring undisguised contempt for those who exploited New Yorkers for their financial gain or personal notoriety. He knew, and taught, the difference between news and celebrity gossip.

And that’s what did him in, at least as a top editor. His refusal to cater to the elite by wasting valuable ink on gossip when there was real news out there to report earned him the undying respect of those of us lucky enough to work for him, but not those for whom he worked.

“OK, maybe he’s just a man,” I wrote when he lost his job as my boss’s boss’s boss. “But God, it was fun working under his reign.”

Pete Hamill died this morning, Aug. 5, 2020. Condolences to his brothers, my friend John Hamill and Denis, with whom I shared multiple “ATEX” messages back before we all knew what an @ sign was.

And to my fellow drones, the cadre of reporters brought together in the paper’s “outer borough” bureaus for rapid responses to 8 million stories a day, let us raise a glass and a pledge in his memory: Resistance Is Never Futile.

Yes, I Will Marry You

“No two couples are alike. No two ceremonies should be.” — Rafael Olmeda

It's never too late to break free

Domenic Garisto / LIFE IS NOT A REHERSAL,SO LIVE IT..if you can't be the poet, be the poem..havau22.com

something to honk about

Call to me and I will answer you...

"Your Silence Will Not Protect You" ~ Audre Lorde

This site is all about ideas

Whether it's work, family, faith or fiction... BIG IDEAS hide in little stories.

Diary of a Real Estate Junkie

One man's obsession with real estate, land use, design, construction & the results.